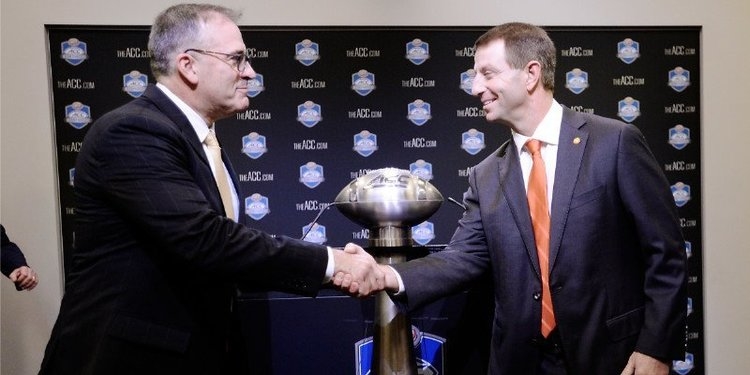 Narduzzi and Dabo Swinney shake hands in Charlotte in 2018 before the ACC title game.

Pat Narduzzi’s Pitt football team has already hosted Notre Dame this season, a 45-3 loss, and now must travel to Clemson Saturday for a contest against No. 4 Clemson. Narduzzi was asked Monday how Clemson and Notre Dame compare, and he said he will need to see the Tigers in person before making a fair assessment. He does know that Clemson is deep and talented.

“Obviously, our focus all turns to Clemson after a nice team win Saturday against Virginia Tech,” Narduzzi said. “You're going to face the No. 4 team in the country in Clemson. They’ve got weapons everywhere, on offense and defense, they have got depth, they're long, they're fast and obviously they're well coached. Dabo does a great job, got a lot of respect for him and always have and how he operates his business down there. We're looking forward to a great week.”

Narduzzi was then asked to compare the Tigers and the Irish.

“They're both really good, obviously. I'll let you know after the game who is better, but it's hard to -- you evaluate Notre Dame on the field and what they do and then you look at Clemson on videotape and until we get -- we haven't faced them for two years since 2018 down in the ACC Championship Game, so it will be interesting,” he said. “But we know Trevor Lawrence and Travis Etienne on offense are explosive. Both offensively and defensively Clemson, they have got a top-20 offense and a top-20 defense. Those are two really, really good ratings when you're both. You got -- a lot of times you see a team that's got a top-rated offense and maybe not as good a defense and vice versa, but they're good at everything they do. We know they're a talent-rich football team.”

Narduzzi’s Panthers are a 24-point underdog to the Tigers, but he said his message to the team will be simple.

“You know what, you really worry about what we do, not worrying about Clemson and who they are,” he said. “It's about us executing -- I don't know what the underdog is, what are we 40-point underdog, I don't know what we are, I don't look at all that stuff. But really not going to focus on us being an underdog or it's a 40-point spread, whatever it is. Just going to focus on what we do and how we execute.”

Pitt saw Trevor Lawrence in the ACC Championship Game at the end of the 2018 season, and Narduzzi said the Tigers have weapons all over the field.

“He's really, really good. He's got a quick release, as I think I talked two years ago, you watch it and it's like, ‘zoom.’ He rifles the ball out there,” Narduzzi said. “He knows where to go with the ball, he makes quick decisions. They don't take many sacks, and they don't make bad decisions. And he's really getting the ball out to Etienne out of the backfield more than ever. So not only do you have to worry about No. 9 running the ball, you’ve got to worry about him catching it now. So he loves to throw it to him. I think Etienne's the No. 2 receiver out there. Amari is No. 2, the slot receiver, (jersey) No. 3, who really lines up all over the place. But they're explosive in the passing game. They have got weapons.”

He then said that Lawrence is one of the top three or four quarterbacks he’s ever seen.

“No question, I mean, you know, I've seen a lot of great quarterbacks, through the years here and he's up there with the top-3 or four,” he said. “I mean Ben Roethlisberger was pretty good when we faced him at Miami of Ohio back in 2002. I look at what he did that year that we played against him. He's like Ben, he's explosive. I don't know, and I don't know if any NFL teams are really tanking. I think it's hard to say, ‘Let's lose today, guys, so we can get him.’ But I don't know if I would go that far. But there's a lot of great players out there.

“Trevor is certainly one of the top two quarterbacks in the country if not the No. 1 guy -- I would say he's No. 1. I would say he's your Heisman Trophy guy. Went through COVID, all of a sudden he slips. I don't understand how that works. We're in a pandemic and he shouldn't lose any votes for Heisman because he didn't play in a couple games because of COVID. It wasn't like he made a bad decision and got whacked in the backfield and went down and threw a pick at the same time. His play on the field speaks for itself.”

Pitt’s run defense is ranked No. 5 nationally, and Narduzzi said the gameplan is to stop Etienne and win the game in the trenches.

“It always is. If you don't stop the run you look at those deals we had a chance to beat them down there, with whatever they had rushing, 50 yards rushing that day (in 2016). And then they had 300 yards rushing in the championship game,” he said. “So that's certainly the deal. You’ve got to make it one dimensional. And really they didn't throw it much in that ACC Championship Game, but it didn't really matter. They didn't have to. So we’ve got to stop the run and Etienne is the guy to start off with and then as soon as you get enough guys in the box then they're going to throw fades and Trevor's really accurate and you’ve got to change up your coverages a lot or you're going to be in trouble.”