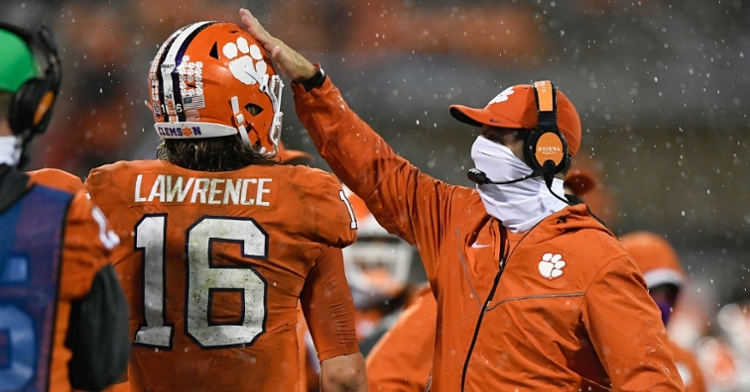 Swinney pats Lawrence on the helmet after a touchdown Saturday. (Photo courtesy ACC)

It’s not often that a member of the New York media decides to attend a Dabo Swinney weekly press conference, so when one of them showed up for Tuesday’s Zoom call, you knew it had to be about Trevor Lawrence.

Tank For Trevor is a commonplace phrase across the league these days as teams jockey to get in position to have the top pick in next spring’s NFL Draft. The team that gets that top pick likely gets Lawrence. Two New York teams – the Giants and the Jets – have identical 0-5 records heading into this week. The Atlanta Falcons are the NFL’s other winless team and would love the chance to take a franchise quarterback who grew up in the Atlanta area.

Swinney was asked about New York and Lawrence and said his quarterback has everything an NFL team would look for.

"Well, I don't have any thoughts about the New York stuff but as far as Trevor as a quarterback prospect, I don't know what you could want that he doesn't possess," Swinney said. "So that's the best way I can answer that. I mean, there's nothing — there's nothing that you could desire to have in a quarterback that's not there. You want size? You got it. You want a guy that could run? You got it. You want a guy that has great football IQ? You got it.

Lawrence has started out strong in his junior season. He has not thrown an interception in 355 passes dating back to last year, completing 29 of 41 (70.7 percent) for 292 yards and three touchdowns in this past Saturday's 42-17 win over then-No. 7 Miami.

Swinney said he never has to worry about Lawrence.

Former Falcons star says Trevor Lawrence should stay in school if Jets have No. 1 pick