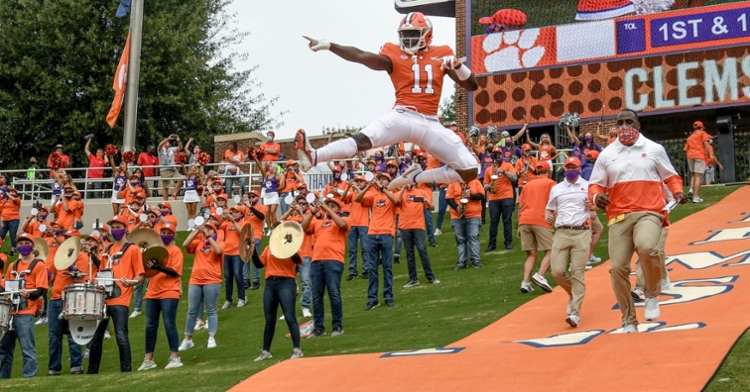 A little after noon today, every single member of the Clemson coaching staff, support personnel, and players will make their way down the Tigers’ iconic hill before the game against Syracuse, except for one. Ajou Ajou will hang back, run down the hill last, and do a perfect split in mid-air as he hits the bump about two-thirds of the way down the hill.

Ajou is different. And he’s special. The Brooks, Alberta, showed a flash of what he can do when he turned a short pass into a 33-yard touchdown reception last week against Georgia Tech. Ajou took the short throw and managed to weave his way through the Tech defense for the score.

Ajou’s first collegiate season is just his third in football. Ajou starred on the football field, basketball court and in track and field for Harry Ainlay Composite High School in Edmonton until he decided to transfer for his senior season at Clearwater Academy International.

He finished the 2019 Florida high school season with 39 receptions for 686 yards and seven touchdowns, averaging 17.6 yards per reception. However, he’s turning into a Canadian sensation, and a member of the media up north called into head coach Dabo Swinney’s press conference this week, delighting the Tigers’ head coach.

“O Canada! We have gone international. Ajou Ajou, man I was so happy for him,” Swinney said. “That was pretty cool to see him take a screen and go 30-something yards just knees and elbows flying all over the field. He was just so relentless to get to the end zone.

“He’s going to be an unbelievable player. He’s this uber-talented guy, but he knows that he has so much to learn, and he’s not afraid of that. He’s not embarrassed by that, he’s not too cool for school. He is a very unique guy, really not have had a guy like him. I’ve never really had a guy like Ajou.”

Ajou has incredible athletic ability and at 6-3, 220 pounds, he already looks the part. However, his lack of football experience means he is still a work in progress.

“His natural ability is pretty special, it’s unique. His vertical is ridiculous, his length, just off the charts. He’s a work in progress, great to see him have a moment like that because that’s going to do a lot for his confidence,” Swinney said.

“He’s 220 pounds, he can run, you don’t realize how fast he is because he’s so gangly. He’s got incredible ball skills. And he’s had a couple of moments in the game. But the game is really, really fast for him right now — really fast in every aspect because there is so much for him to grasp.”

“He’s played a long time in Canada, you watch any of his tapes and there is three feet of snow, he’s out there, he’s tough. He loves football, you gotta love football to play football in three feet of snow and that’s your norm,” Swinney said. “This kid will be one of the funnest guys that I have a chance to coach. Literally taking this kid that’s got all this talent, and trying to teach him almost a new language. It’s going to be a lot of fun to develop him.”

“He’s a developmental guy, a little patience with him, you just keep pouring water on him and you’re going to look up here in a couple of years and everybody is going to know who Ajou is. He’s made a ton of progress since he got here. He’s a guy that will be a big-time factor for us as we continue to move through this season, but certainly the rest of his career. He has that in him.”